Goat in the Snow 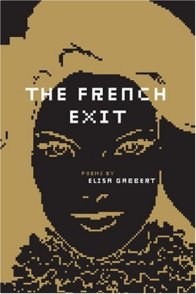 Kings of the F**king Sea

Five titles from Birds LLC, who published Partyknife by Dan Magers, one of my favorite books published 2012 (the other is Alien vs. Predator by Michael Robbins):

So far, the only Birds LLC title I don’t have is the just-released Rise in the Fall, with poems by Ana Božičević and art by Bianca Stone. I’ll most likely order that when they also release The First Four Books of Sampson Starkweather.

I met up with my thesis adviser yesterday (hello, sir!), and he told me about how his fellow postgrad at the University of St. Andrews won the Forward Prize. I looked up Rachael Boast and found these three poems rather engaging.

I glanced at my adviser’s bookshelf and found an Annie Freud collection, and because that surname always get me to perk up, I looked her up online and found four poems I enjoyed even more.

And finally, because I follow Ana Bozicevic on Twitter and really like her poems even if I always have to look up her surname, I’m linking to these three poems, the first two of which are especially resonant to where my mind is these days.

UPDATE: Another two poems by Bozicevic. Great stuff, though I once again had to look up her name as I typed it. *shakes head*